Before the trip, I was so jazzed about Dublin and Salzburg, I didn’t have many expectations for Munich. It wasn’t a city “on my list,” but Kevin wanted to check it out, so I went with the flow. When Munich turned out to be totally awesome, it was a pleasant surprise! We were only in town for two days, so I would go back in a heartbeat to visit again. If you are a beer drinker, this city is for you!

We stayed at the Mercure Hotel Muenchen City Center across the street and down a block from the train station. It was great! It was walking distance from the train, clean, affordable and it had a free mini-bar with drinks and snacks! Plus the staff was SUPER friendly.

Our first stop? The Hofbrauhaus. The beer was delicious, the ambiance was great (the more polka, the better), and the sausage/sauerkraut was awesome! 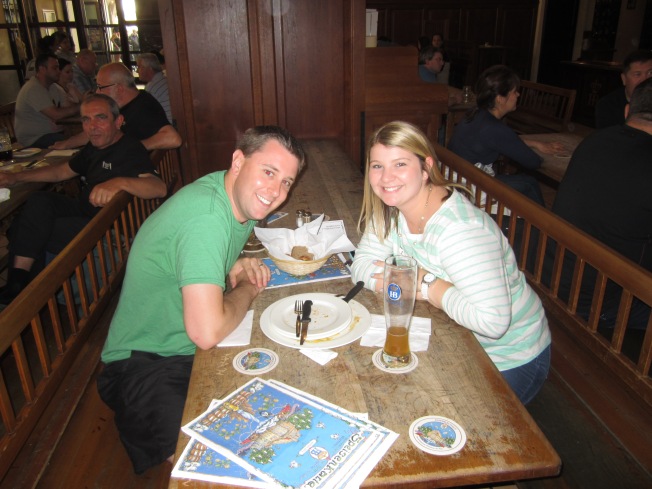 After our stop at the Hofbrauhaus, we stopped at the Glockenspiel Clock in the Marienplatz. Since our time in Munich was so short and we had many things we wanted to see, we didn’t have the luxury to be at the clock when it moved. Even without the movement, the Glockenspiel was a really cool stop.

The next day, we decided to buy another set of Hop On/Hop Off bus passes since we liked them in Dublin so much. We took a guided tour of the city from the top of the double decker and stopped at Nymphenburg Palace and the Olympic Park from the 1972 Games. Without the bus pass, we probably wouldn’t have seen either of these places. Neither location was a “show-stopper” for me, but they were enjoyable. We also spent some time at BMW Welt – again we didn’t have time for a guided tour, but it was fun to sit in some of BMW’s nicest cars and “ride” on some of their motorcycles! 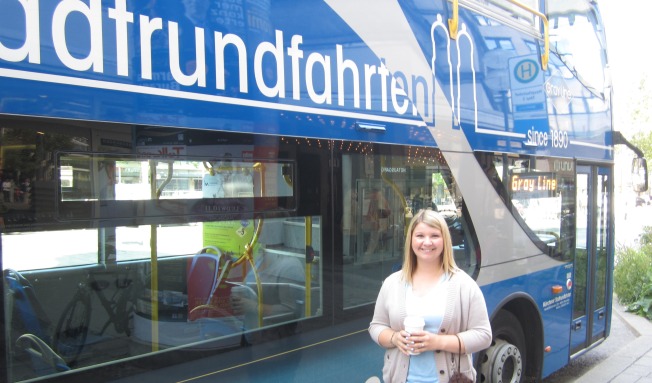 Our dinner that night was recommended to us by our friend Ryan from Dublin. He said get the Kaese Spaetzle. This dish is basically loaded mac and cheese. With an ice cold German beer, it was the most delicious mac and cheese I’ve ever had! If you like lots of cheese and onion, this dish is a must-try!

Two days was not nearly enough in Munich. I would have liked to stayed for four or five days and done some more touring inside and outside of the city.I cannot wait to explore more of Germany someday – the region of Bavaria will remain on my “favorite places” list.